Among the many pieces of historical, gustatory, and alcoholic miscellanea we can gather from the pages of Mason & Dixon, the early birth and long-life of the mutual incomprehension customary between British and American beer drinkers is one I particularly enjoy. Yanks find British beer dank and warm, Poms find the US stuff fizzy and insipid, and apparently it has ever been thus. Here’s Dixon offering to buy a round on page 569:

“Eeh, lo, thy Jack’s empty…? Can’t have thah’, allow me, all who’re dry, no problem, Mr. McClean shall enter each into his Ledger, and in the fullness of Time will all be repaid,— aye then, here they come! how canny, with those greeaht Foahm Tops on ’em, what do tha call thah’?”

“That is a ‘Head,’” Blackie quizzickal. “They don’t have that, back wherever you’re from? What kind o’ Ale-drinker are you then, Sir?”

“Shall we quarrel, after all?”

“Very well, as tha did ask,— I’m a faithful and traditional Ale-Drinker, sir, who does thee a courtesy in even swallowing this pale, hopp’d-up, water’d down imitation of Small Beer.”

“Far preferable,” replies Blackie, “— even if sladerously and vilely untrue,— to that black, sluggish, treacly substitute for Naval Tar, Sir, no offense meant, that they swill down over in England?” with a look that would have been meaningful, could it get much beyond a common Glower.

After which point, unexpectedly, both find the forgiveness in their hearts and the broadness in their palates to appreciate each other’s ales after all. They pull back from the precipice of this argument and join in another comradely American Pint.

As an aside, when I first read Mason & Dixon the 18th century-ish language seemed forbidding at first but quickly came to feel familiar and comfortable. But transcribing bits of it really dispels the illusion that this kind of writing could ever come easily–the effort that must have gone into making such strange sentences read so easily must have been phenomenal. And they don’t just read easily, they spark incredibly into life. The layers of phonetic accents and mock (?) 18th century weirdness somehow result not in abstract postmodern textual artefact or overblown monstrosity but in a Jeremiah Dixon so real and human you can just about smell the beer on his breath. 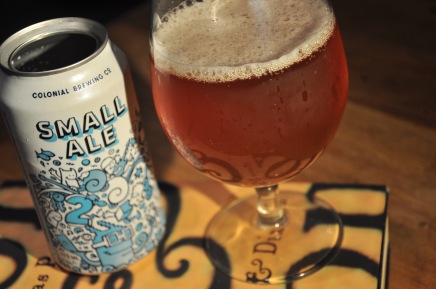 Small Beer, the particular British style Jeremiah denigrates the American specimen in relation to, was a lower-alcohol beer that was often brewed from the second runnings of wort when making a stronger beer. Workers would drink it through the day, children at festivals. The beer I have here is quite literally a “hopp’d-up imitation” of such a style. It’s the Small Ale from Colonial Brewing Co in Margaret River, Western Australia, a pale ale with grassy and citrusy hops, suprisingly flavourful for its 3.5% abv. The Foahm Top is decent if perhaps not greeaht. I don’t love it, would rather go straight to something stronger. But if Mr Dixon happened around, I guess this wouldn’t be the worst representation of Australian beer he could try. No doubt we could have a most convivial time over a few pints of it.