…so quoth a commenter when the Guardian books first introduced our frivolous little endeavour to the world. And I know of course one shouldn’t read the comments and less still feed the trolls, but I have been looking forward to this post ever since.

As any true Pynchonite should realise, Pynchondom abounds with dedicated souls who wouldn’t blink at slurping down a vodka and milk for the cause. Two of the most dedicated of all must be the hosts of the marvellous Pynchon in Public Podcast, Chris and Bo. I had the great honour of appearing on their latest episode, where we drank this on air. Chris took the milk, Bo the vegetable soup, and I the watermelon juice. Get yourself over there now and listen, they’ve edited out all my drunken slurping noises, it’s a fun time. Here’s the iTunes. Very excitingly, they’re about to start a season on Gravity’s Rainbow — never a better time to jump aboard there if you haven’t already.

The vodka with milk/soup/watermelon is, as AbsurdistGeographer helpfully explained, drank at the tail end of a party near the beginning of V. It’s a pretty sombre party though. Here’s the passage (p. 18):

They would sit around a table in Teflon’s kitchen: Pig Bodine and Dewey Gland facing them [Paola and Benny] one each like partners at bridge, a vodka bottle in the middle. Nobody would talk except to argue about what they would mix the vodka with next when what they had ran out. That week they tried milk, canned vegetable soup, finally the juice from a dried up piece of watermelon which was all Teflon had left in the refrigerator. Try to squeeze a watermelon into a small tumbler sometime when your reflexes are not so good. It is next to impossible. Picking the seeds out of the vodka proved also to be a problem, and resulted in a growing, mutual ill-will.

We split the drinks up on the podcast, but I couldn’t let the two I didn’t take pass me by entirely. So let’s go, round two, I’m tackling them all again.

Disclaimer: I drank these on seperate evenings. Attempting to drink all three at once may lead to profound unhappiness.

First up: vodka with milk. 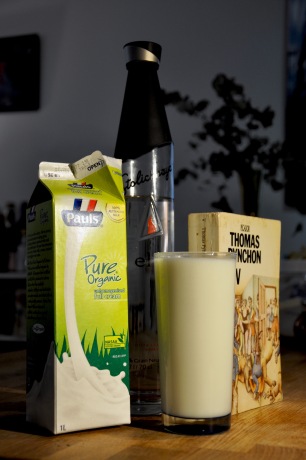 I got home from work ready for a beer and instead dropped a shot of vodka in a tall glass of cold milk (just in case my dedication is still in question). It didn’t really taste too horrible, which seemed wrong, so I added more vodka. This did amp up the grossness considerably. It somehow seemed far creamier than just ordinary milk, which combined with the vegetal/metallic vodka edge and slight alcohol burn just got really weird, particularly as you get more than a few sips in. I guess it wasn’t totally awful. A big milk fan could probably dig it. I struggled.

Next: vodka with vegetable soup. 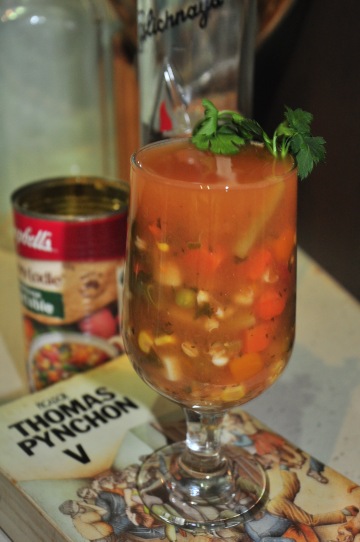 Well doesn’t this one just make the other two look like strawberry daiquiris. It’s shudderingly gross. Bo elected out of his own free will to drink it on the podcast (his version is pictured below). I still have lingering guilt over suggesting this particular trio. Thinking that Pig Bodine and co wouldn’t bother with heating, Bo left it cold. I’ve done the same. Cold vegetable soup out of a glass is gross enough to begin with; vodka takes it to a new level of spewiness. As I think Bo found on the podcast, much of the vodka seems to float to the top, being less dense than soup. That means it starts horrible but gets milder and milder. By the time I was eating the last celery and corn out of the glass with a spoon, it was almost enjoyable. Almost. 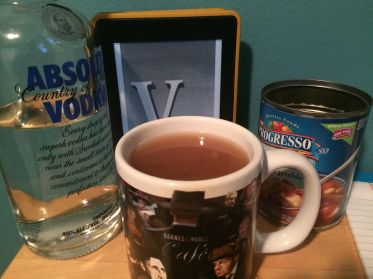 Last up: vodka with watermelon juice. 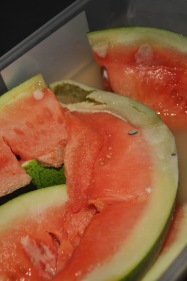 I drank this one on the podcast, mashing the juice straight out of a fresh watermelon. That wasn’t really fair, seeing as V clearly specifies a “dried up” piece of watermelon, and the hosts were drinking the nastier mixes above. I kept the rest of the watermelon in the fridge though, ready for a crustier reprise here. Probably because I sealed it in tupperware though, it didn’t dry up at all — it turned to soggy mouldy pulp. Yum. Luckily I had one chunk in the freezer, and that defrosted into a flaccid but (crucially) mould-free source of juice. If this fails to follow the letter of the drink as set down in V, it is at least loyal to the spirit of just using whatever you’ve got, whatever particular grossness that might entail.

The result was drinkable, but not wonderful. Just stale watermelon. It looked pretty! Pynchon’s not wrong though, picking the seeds out sure was irritating. 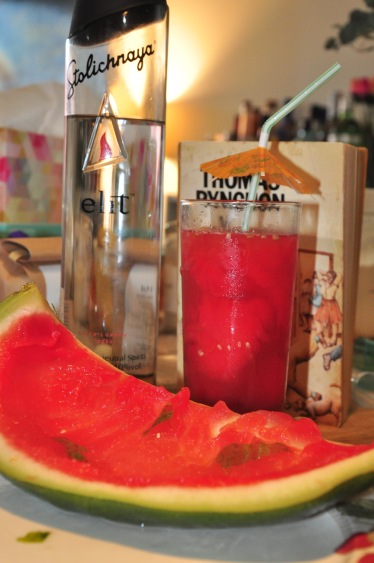 What are you still doing here? Go listen to Pynchon in Public!

2 Replies to “Vodka with Milk, Vegetable Soup, and Watermelon Juice”