I’d hazard a guess Pynchon’s a wine man. The books are littered with specific vintages and vineyards, many of them challenging for the budget of this blog.  (On the other hand, he could just be using a wine-guide like he does those Baedekers.) As something of a beer nerd, I do now and then pine for more hops and grains around here.

In Against the Day, though, we find ourselves in Belgium, and the geeky beers can’t help but break through. 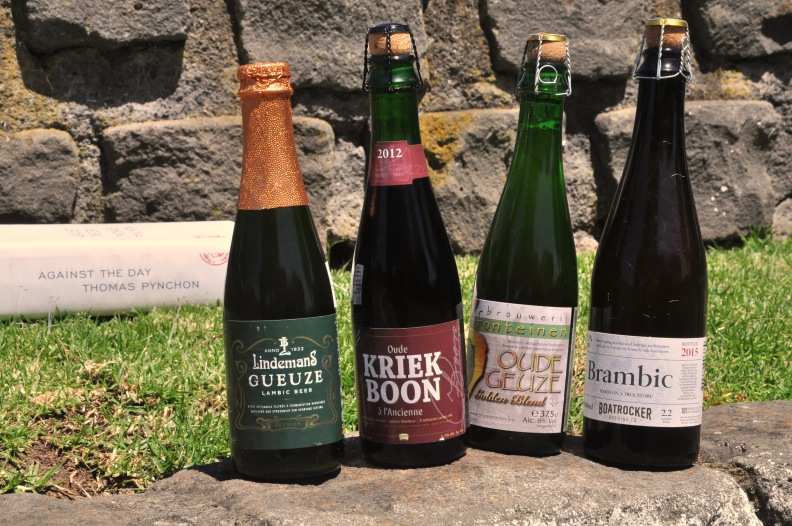 After Kit’s cruise ship, the Stupendica, mysteriously refracts into the SMS Emperor Maximillian, he pauses in Morocco before hopping onto the trawler Fomalhaut, which dumps him in Ostend, Belgium. He’s barely had time to find his land legs before he’s sitting in a café with a beer. No telling whether that one’s a lambic or not, but then a troupe of “unkempt, even seedy” mathematicians tumble in and recognise Kit as a fellow Quaternionist. From page 525:

“Hey there, Kellner! a demi of Lambic for that bloke over there with the seaweed on his suit,” called a cheerfully insane party in a battered skimmer that looked like he’d found it on the beach.

Kit made what he hoped was the universal sign for short funds by pulling out an imaginary pair of trouser pockets and shrugging in apology.

“Not to worry, this week it’s all on the Trinity maths department, they’re wizards at solving biquaternion equations, but show them an expense account and lucky for us their minds go blank.” He introduced himself as Barry Nebulay, from the University of Dublin, space was made, and Kit joined the polyglot gang.

As so often in Pynchon, an isolated character wanders into a bar and finds their isolation quickly dissolved in warm, drunken company.

In this case, the particular solvent is uniquely Belgian. Lambic is a highly unusual type of beer fermented slowly in barrels by a combination of naturally-occurring wild yeasts and bacteria. Complex sour, funky flavours result, with common descriptions including “horse-blanket,” “hay,” and “goaty.” Lambic can be blended to make gueuze, usually a mix of 1-, 2-, and 3-year old batches. Or, by adding cherries to the barrel, you can make a Kriek (Flemish for cherry) lambic. Sometimes it’s also served straight unblended from the barrel. Lambic.info has barrelsful of interesting info on the style if you want to know more.

A demi is a half-litre glass in Belgian cafés. But I’m too excited about this one for just a single demi. Instead, I’ve got:

The top three are real Belgian lambics, while the Boatrocker is an Australian take on the style. 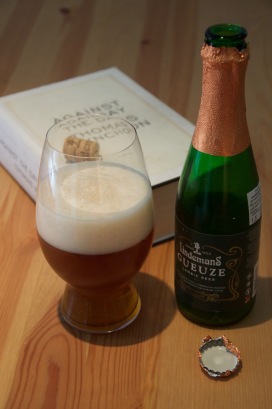 The Lindemans Gueuze smells like lemons squeezed over hay, with a bit of basil. Less of the barnyard shows up in the taste — it’s mostly like a lemon drop. Very sweet, not enough funk for my tastes, but still pretty enjoyable. It’s a dessert wine kind of lambic. Lindemans adds stevia as sweetener. They can’t use sugar because the beer is unpasteurised, and the surviving yeast would eat it up and potentially burst the bottle. This sweetening is non-traditional, but overtook much gueuze production in the ’70s and ’80s. Lambic snobs look down on the practice, and the traditional unsweeted style has seen a resurgence in recent years. Nothing else on the menu for today has any sweetening.

Get a look at the colour on that Boon Oude Kriek. Even the head’s rose-coloured. Gorgeous stuff. Big sour cherry aroma, taste mainly of the same, plus some green apples and hay. None of the sweetness of the Lindemans, just dry and delicious. The acidity’s pretty close to what you’d expect in a white wine, which it could almost pass for if you wanted to trick/convert a beer-hater. I loved it.

Now for the big gun: the 3 Fonteinen Oude Gueuze Golden Blend, apparently one of the best gueuzes there is. I might lack the expertise to properly appreciate this one, but here goes…

Poured with a BUNCH of head, but that’s settled right down now. The aroma’s apricots, grass, oak, aniseed, and pepper, and pretty much all the other smells as well. Or none of those things. It’s beguiling, indefinable.

It’s occurring to me that the challenge of describing what this tastes like is akin to the challenge of describing what Against the Day (or really any Pynchon book) is like. Weird, complex, a little grass, a hint of booziness, challenging, pretty fruity, confuses the hell out of you and keeps you wanting more, seems to contain within it most of the mysteries of the universe, and is just a big pile of fun.

Gueuze is the Pynchon of beer.

Perhaps like Pynchon and other writing, I could see this stuff ruining me for other beers. Just give me more of that mouth-filling tart apricot funk.

Last up: Australian upstarts Boatrocker with their “Brambic,” in the unenviable position of following the 3 Fonteinen. This one’s unblended, uncarbonated, two years old straight from the barrel. It was a birthday present—thanks Drunk Pynchonette! The aroma is spicy lemon with a little wet-blanket funk. Tastes very dry, citrus and stone-fruit, a bit astringent, with more sourness and more prominent barnyard-type notes than the previous three beers. Difficult, surprising, but somehow entirely elegant—not so much a Pynchon novel as one of his best sentences.

Accept my sincerest apologies if we’ve descended too far into pretentious self-indulgent geekery this time.

Lambic comes up again a bit later in Against the Day, when Kit runs into the mysterious (but who isn’t) Pléiade Lafrisé (page 544):

She was in pale violet peau de soie, and a hat so beguiling that Kit was only momentarily surprised to find himself with an erection. It was still early in the study of these matters, only a few brave pioneers like the Baron von Krafft-Ebing had dared peep into the strange and weirdly twilit country of hat-fetishism—not that Kit noticed stuff like that ordinarily, but it happened actually to be a gray toque of draped velvet, trimmed with antique guipure, and a tall ostrich plume dyed the same shade of violet as her dress. . . .

“This? One finds them in every other midinette’s haunt, literally for sous.”

“Oh. I must’ve been staring. What happened to you the other night?”

They head to a “museum of mayonnaise,” and later that night she tries to kill him. Maybe he didn’t buy her a nice enough lambic.