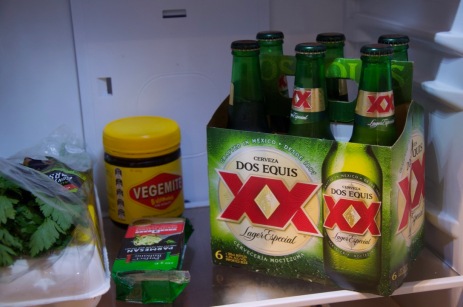 Vineland hasn’t gotten much of a run around here, I think because I can barely remember what happens in it. Something to do with Reagan? And ninjas? Clearly a reread is in order sometime soon.

I do remember Pynchon’s sympathies for Family as a potential seat of grace and humanity and a bulwark against Their machinations coming through somewhat explicitly for maybe the first time in Vineland. And so it’s appropriate that we find ourselves doing some father-daughter drinking here. 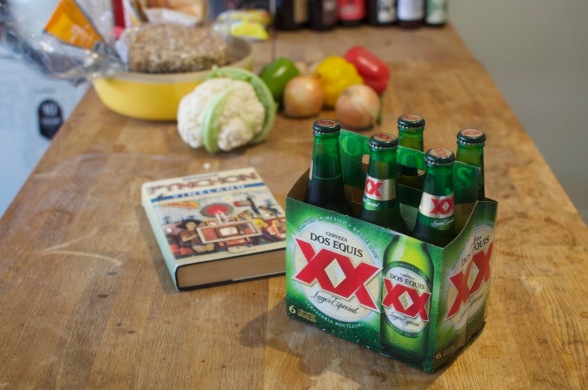 In chapter two, Zoyd’s daughter Prairie shows up with her boyfriend Isiah Two Four, whose mohawk is dyed in Zoyd’s favourite colours maybe in “some weird effort to be nice,” which effort also turns out to include Zoyd’s favourite foods and beverages. Page 18:

“Eats, you guys,” Prairie coming in with a gallon of guacamole and a giant-size sack of tortilla chips, Zoyd wondering if soon there ought not to appear as well, aha there it was — a cold six-pack of Dos Equis, ah right! Popping one open, beaming, he observed once again in his daughter the sly, not yet professionally developed gift of staging a hustle, something she must surely have got from him, and he felt himself begin to glow, unless it was the guacamole, in which she’d gone a little heavy tonight on the commercial salsa.

Prairie wants something from him, of course, although I’m going to save figuring out what for that reread. For now, can I say that that six-pack had better be cold as heck (or no, I guess, cold as heck isn’t), because I have some Dos Equis here and I must assert that it is among the worst beers I have ever drunk. And I regularly attend a homebrew club.

This thing is Zoyd’s favourite? It presents a dizzying array of faults and things to hate, while somehow remaining totally one-dimensional. Mostly, it’s super corny and buttery, with no discernible malt character, and lots of fizz. Very thin, but only refreshing in the most narrow technical sense. And also tastes oddly alcoholic for a 4.2% ABV beer?

You may have gathered that I’m not a fan. We could be generous to Zoyd and Dos Equis and assume my six pack had spent a year in a hot warehouse slowly dying before it reached me, but we might do just as well to recognise that one’s favourite beer is of course all but entirely a romantic concern, disassociated altogether from whatever the liquid might actually taste like, and built instead on visions of possible shinier selves and the six-packs they might favour.

Zoyd’s come up on commercial’s like the one below, and I won’t psychoanalyse what that tells us about his character because as you’ll recall I don’t remember the book, but I will say that the girl in the ad looks very plausibly like a character from a Pynchon novel.

I found the “Dos Equis experience” was one I had to to drag out over several weeks to tolerate. I just just finished the sixth bottle and would like congratulations. Speaking of congratulations: the Pynchon in Public Podcast team have released the penultimate episode of their GR season. Look out for a bit of a special post next time in tribute to their monumental achievement and service to Pynchondom!

One Reply to “A six-pack of Dos Equis”