The Kenosha Kid episode is something of an early milestone in Gravity’s Rainbow, I’d say. Sixtyish pages in, playful and bizzare, it might well mark the dividing fork at which a new Pynchon reader either hurls the book at the wall or really starts to settle in for a good time. Slothrop’s doped up on sodium amytal, dreaming variations on the phrase “you never did the Kenosha Kid.” They start brief, e.g.: “Superior (incredulously): You? Never! Did the Kenosha Kid think for one instant that you…?” and then suddenly Slothrop’s upstairs in Boston’s Roseland Ballroom watching his harmonica disappear down a toilet’s maw. If you’ve ever seen Trainspotting, you’ll be familiar with Danny Boyle’s ripoff of what happens next: he chases that Harmonica right down the toilet and finds a murky world submerged below:

The light down here is dark gray and rather faint. For some time he has been aware of shit, elaborately crusted along the sides of this ceramic (or by now, iron) tunnel he’s in; shit nothing can flush away, mixed with hard-water minerals into a deliberate brown barnacling of his route, patterns thick with meaning… icky and sticky, cryptic and glyptic…”

…which whole episode eventually and unexpectedly circles all the way back to “you never did the Kenosha Kid.” Anyway, while he’s down in the gunge, Slothrop “finds he can identify certain traces of shit as belonging definitely to this or that Harvard fellow of his acquaintances.” Useful talent to have. One “Dumpster Villard” features prominently among these acquaintances.

A-and here’s Dumpster Villard , he was constipated that night, wasn’t he–it’s black shit mean as resin that will someday clarify forever to dark amber. In its blunt, reluctant touches along the wall … he can, uncannily shit-sensitized now, read old agonies inside poor Dumpster, who’d tried suicide last semester: the differential equations that would not weave for him into any elegance, the mother with the low-slung hat and silk knees leaning across Slothrop’s table in Sidney’s Great Yellow Grille to finish for him his bottle of Canadian Ale, the Radcliffe girls who evaded him…

The list goes on. All the cumulative sufferings of Dumpster’s life (and being named thus must factor in there somewhere too) are recorded there for shit-sensitised Slothrop to read. Including that episode with the Canadian Ale! 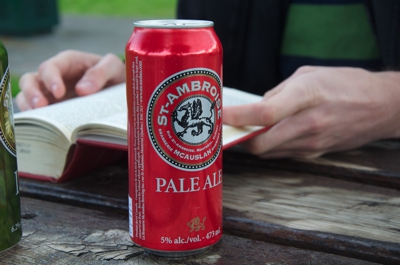 I realise none of this has made the loveliest introduction for a drink. But nevertheless, allow me to present my Canadian ale selection: the St. Ambroise Pale Ale. It’s from a brewery in Montreal. I’ve gotta say, I was pretty excited to have a chance to drink some crafty beer for this blog. But this one isn’t my favourite. It’s very bitter, but without all that much hop aroma. Much more like a British style Pale Ale than the American I was expecting (and hoping for). Actually tastes weirdly like Pilsner Urquell. So much so that I would have bet they’d used Saaz hops. But no, it’s Cascade, Williamette, Golding, and Hallertau. Who knows. It seems to be a pretty well-liked beer. Maybe it didn’t survive the trip across the world so well. If I were Slothrop, I might leave this one for Dumpster’s mother too.