From Hemingway’s Papa Doble, on to another drink with a great literary/artistic pedigree: absinthe. We’re all familiar with its green fairy aura of inspired madness and creative self-annihilation. The stuff’s been put away by Baudelaire, Emile Zola, Oscar Wilde, Picasso, Modigliani, etc etc etc. Even more impressively, it gets mentioned in both V. and Gravity’s Rainbow. In V., a not exactly gallant sounding bloke called Ferrante is described as “a drinker of absinthe and destroyer of virginity,” and Signor Mantissa remembers a “blond seamstress in Lyons” who “would drink absinthe at night and torture herself for it in the afternoons.” 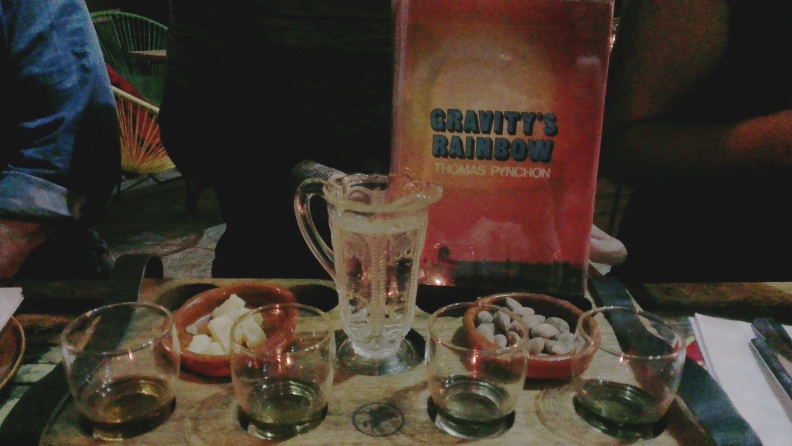 Well and then in GR absinthe gets some even better peripheral press, aboard the fun-filled Anubis:

Slothrop looks around and finds Miklos Thanatz, full beard, eyebrows feathering out like trailing edges of hawks’ wings, drinking absinthe out of a souvenir stein on which, in colors made ghastly by the carnivals lights on deck, bony and giggling Death is about the surprise the two lovers in bed.

And what a Gravity’s Rainbow sentence is that. Crazy looking dude with a whole stein of absinthe, reflecting the wider scene in the lights of the boat while also telling a (highly relevant) inset narrative of Death gleefully interrupting love. Plus then one stein of 70% alcohol isn’t enough:

Thanatz is holding out his stein for a refill. The waiter, deadpan, dribbles water down a spoon to turn the absinthe milky green while Thanatz caresses his buttocks, then moves away.

I went hunting for some milky green of my own at Canvas in Brisbane (highly recommended, if not quite such a temple of hedonism as the Anubis). They had an absinthe/pastis tasting flight on offer (pastis being an anise liqueur with a similar flavour to absinthe). Thanks to another generous benefactor, I sampled a bit (not quite a stein-full) of each of:

This is admittedly a bit of a weird list for an “absinthe” tasting, not actually including any French absinthe. The pastis are French but wormwoodless. The Koruna is Czech–hence the lack of an “e” on “absinth.” Only the Mansinthe is actually absinthe with an “e”, and it’s made by Marilyn Manson. Which explains the inauspicious 66.6% alcohol concentration. Manson’s stuff does seem to be pretty legit though, distilled from the proper herbs in Switzerland with no added sugar. Anyway, those other three are close enough to count too. The waiter warned me that the last two contained wormwood, but “not the crazy cut-your-ear-off van Gogh kind.” 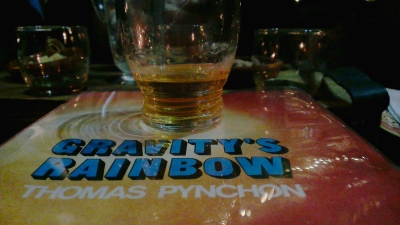 All four of them were very aniseedy, of course. The Ricard Pastis tasted like sweet liquoriche. All the flavours seemed to be arranged really differently in your mouth compared to other spirits I’m more used to. Watery on the front, then getting all syrupy and rich. The Henri Boudin was less sweet, with stronger herbal notes. The Bohemian absinth really upped the ante, in taste as well as alcohol—a sharp rich spike of peppermint up front, plenty of burn filling it out. Complex and kind of invigorating. The Mansinthe was a bit of a mellower take on the same, with some fruity nutty notes too I thought. But less interesting than the Koruna.

That’s all before the water. After dripping some water from a pretty little jug into each, their flavours changed pretty dramatically. Most acquired smokier notes; the Czech one even had a dark chocolate thing going on. Mansinthe seemed to get more vegetabley. And of course, just as Pynchon writes, their appearance changes too. Each drop of water sends a little smoky mist spiralling through the liquid, and they do turn totally milky with enough water. I forgot to take a photo–which forgetfulness is by the way about the strongest absinthe symptom I experienced. No hallucinations here.

That milky mist shows up again late in GR, in the Counterforce, when Roger Mexico (one of my favourite GR characters) makes his glorious statistician’s reappearance, raging into Mossmoon’s office trying to rescue Slothrop from Their machine:

He’s looking into a room of incandescent lemon-lime subdued drastically, almost to the milky point of absinthe-and-water, a room warmer than this tableful of faces really deserves, but perhaps it’s Roger’s entrance that deepens the color a bit now as he runs and jumps up on the polished table, over the polished head of a director of a steel company, skidding 20 feet down the waxed surface to confront the man at the end, who sits with a debonair (well, snotty) smile on his face. “Mossmoon, I’m on to you.”

Then he relieves himself, of both urine and rage, all over everything. A good note to end on.

3 Replies to “Absinthe with water”