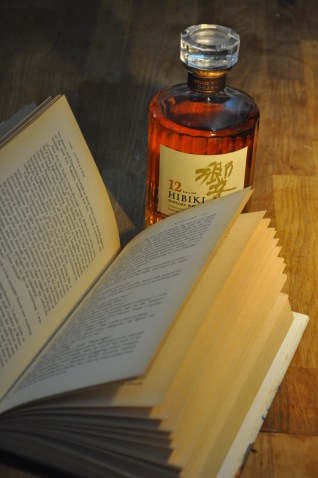 My whisky knowledge has progressed not at all in the past year. My tasting notes for this might look something like:

The finish: more of this whisky please.

But even if I don’t feel qualified distinguishing the ripe orange scents from the marmalade overtones, I’m confident telling you that this stuff is great.

It comes to the Liquor Cabinet courtesy of Vineland. After Takeshi gets Vibrating Palmed by DL, he makes “an emergency appointment with one of the staff croakers at Wawazume Life and Non-Life.” The doctor is concerned, and Takeshi tells him about DL. From page 156–57:

He told the doctor about their rendezvous in the Haro no Depaato while he ran Takeshi through an abbreviated physical, grunting darkly at everything he seemed to find. Nothing really showed up, though, till the urine scan. Doc Oruni pulled a bottle of Suntory Scotch out of a small refrigerator, found two paper cups, poured them 90% full, put his feet up on the desk, and dolefully surrendered to mystery. “There’s no cancer, no cystitis, no stones. Proteins, ketones, all that — it’s normal! But something very weird is happening to your bladder! 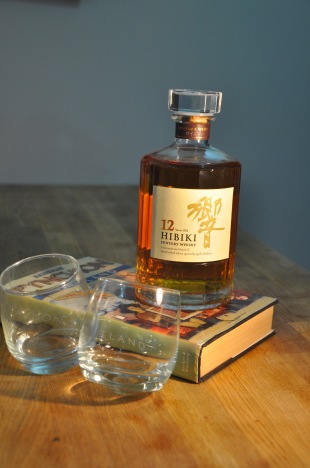 Ominous indeed. And jarring now having tasted and loved a Suntory scotch to see it nestled in that paragraph surrounded by urine. Later, Takeshi leaves the doctor’s office reeling under the influence of the Suntory and the other chemicals he’d obtained howling “My own sleaziness — has done me in!”

About that word scotch up above. It seems an odd choice here, because, of course, Suntory’s not Scottish, it’s Japanese. It’s not un-scotch-like though, and Pynchon doesn’t seem to be the only person to have referred to it as Suntory Scotch. Japanese distilling did begin, says Wikipedia, as a “conscious effort to recreate the style of Scottish whisky.” Which I’d say makes it fit in nicely in Vineland—weirdly dovetailing Japanese and Western culture.

Ah and a little postscript: as if the Hibiki was not enough of a celebration, we had a cake too. Happy birthday Tom Pynchon’s Liquor Cabinet! 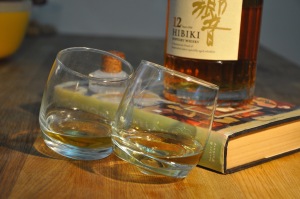 One Reply to “Suntory Scotch”