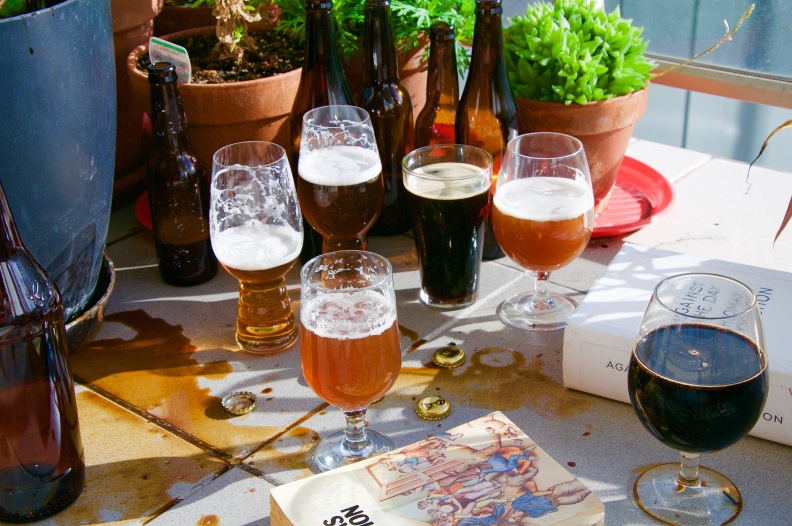 Pynchon fans can get a bit of a bad wrap—all pretentious weirdo dudes with neck-beards. Homebrewers have something of a similar reputation. In both cases of course, reality is far more capacious than the stereotypes. But you might expect some overlap between the two communities. Any other homebrewing Pynchonites out there? 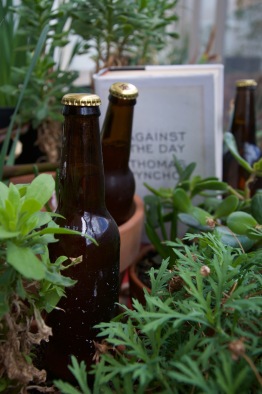 Pynchon’s characters lean towards the grape when it comes to DIY-fermentation. Homemade wine of various kinds shows up in V., Lot 49, Slow Learner, Vineland, Mason & Dixon, and Against the Day. But a little beer does get made too.

When Against the Day‘s Frank Traverse arrives in the hellish Telluride (in the chapter beginning around page 281), well-connected general store proprietor Ellmore Disco takes him lunching at the very popular Lupita’s, a Mexican place where “the menudo can’t be beat” and the homebrew probably ain’t bad either. Page 287:

Clerks and cashiers, birds of the night but newly risen, stockmen down from the valley, Mexican laborers streaked with brickdust, skinners waiting for the train sat alongside Negro newsboys and wives in their best hats, all indiscriminately filling the benches, grabbing and gobbling like miners in a mess hall, or standing waiting either for a seat or for one of the kids working in the kitchen to fill their lunch pails or paper sacks with chicken tortas, venison tamales, Lupita’s widely known brain tacos, bottles of home-brewed beer, sixty-degree wedges of peach pie, so forth, to take along with them.

Add Lupita’s to my list of Top Ten Pynchonian Bars & Restaurants to Visit Before You Die.

Lupita isn’t the only brewing Against the Dayer either. On page 308, we learn that the tommyknockers also produce some DIY suds. I confess I had no recollection of who or what the tommyknockers were, AtD being swarmed with more forms of life and humanity than I can hold between my ears, but the internet reminds me (here and here) that they are the “little people of the mines,” the “underground spirits who guard the earth’s ores.” Of course. They’re hanging out down a Little Hellkite mineshaft—Page 308:

Not only had the tommyknockers found this sector of the Little Hellkite congenial—in the years since its abandonment they had converted it into a regular damn full-scale Tommyknockers Social Hall. … Those duendes were playing poker and pool here, drinking red whiskey and home-brewed beer, eating food stolen out of miners’ lunch pails as well as the pantries of the unmarrieds’ eating hall, getting into fights, telling tasteless jokes, just as you might find in any recreational club aboveground, any night of the week.

The only other homebrew in Pynchon’s books is way back in V., where a Willem van Wijk “waved a bottle of homemade beer” at Kurt Mondaugen, future Gravity’s Rainbow cast-member. Van Wijk has the right idea—in my experience, homebrew is often better for gesticulating with than drinking. For about the last year, Drunk Pynchonette and I have been fumbling out way towards brewing something halfway palatable. Results have been mixed. We’ve attempted four IPAs, three stouts, a brown ale, and a pale ale, with recipes derived variously from Mikkeller’s Book of Beer, Brew Better Beer, and Brewdog. The best, reassuringly, have been our most recent: two single-hop Ella IPAs. Before those, everything tasted mostly like pond sludge. But drinkable or not, the whole process is a lot of fun.

It’s also excellent preparation for an eventual batch of banana mead, perhaps the true grail (or Slothrop rocket) lurking in the background of this whole endeavour…

One Reply to “Home-brewed Beer”