Against The Day, Wine 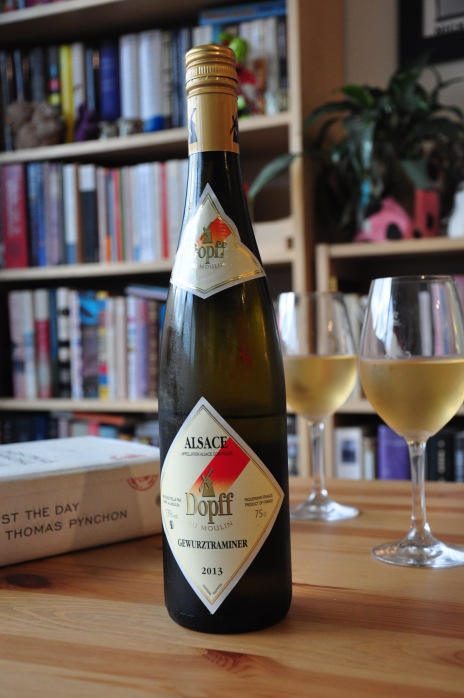 We’ve just about hit 50 Empty Bottles here at Tom Pynchon’s Liquor Cabinet, but this post marks our first occasion revisiting a passage to pull out a second drink. November last year, Against the Day led me to some apricot brandy abandoned in a safe-house cupboard. (I remarked at the time that it was a bit rough, and I can now confirm that it has been pretty much abandoned in my cupboard too). That brandy wasn’t the only booze left behind there though. Here’s the passage again (p. 718):

By the unwritten rules of these transitory dwellings, the cupboards yielded a sketchy culinary history of those who had passed through—bottles of Szekszárdi Vörös, Gewürtztraminer and apricot brandy, chocolates, coffee, biscuits, tinned sausages, wine, boxes of dried noodles of various shapes and sizes, a white cloth bag of tarhonya from the previous century.

As I remarked in the apricot brandy post, most of that stuff is pretty (and, in context, suspiciously) Hungarian. Gewurtztraminer, though, is mostly French. It’s mainly associated with the Alsace region near Germany (which explains that name). The Hungarians might not be totally off the hook however: Wikipedia does say some of these grapes grow there too, known locally as Tramini. Complicating that further is Pynchon’s use of the German spelling with the umlaut, which the French omit… Anyway, I’ve gone with an Alsace version. 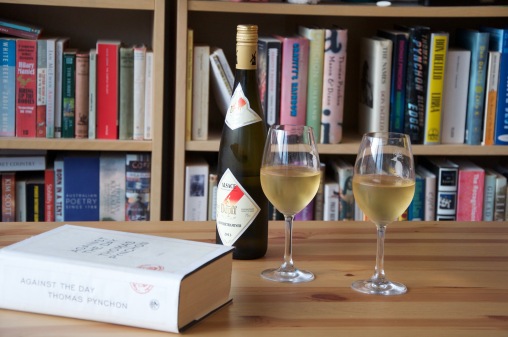 Gewurtztraminer is supposedly characterised by a “flamboyant bouquet of lychees” and maybe I’m just suggestive but I’m finding that a pretty convincing description not just of the aroma, but also the taste and even the mouthfeel. It’s reasonably sweet, and that residual sugar, combined with a lack of acidity, gives it a distinctively lychee-esque full fleshy texture. This particular one was Dopff au Moulin 2013.

Were I abandoning a safe-house, I might try not to leave this drop behind. It’s not particularly fancy, but pleasant and interesting enough that one shouldn’t have to search too hard for an occasion to polish it off. Plus internet wine people advise that Gewurtztraminer is suitable for ageing “only a very few years” if at all, so you couldn’t expect to go back and find it later in much of a condition…