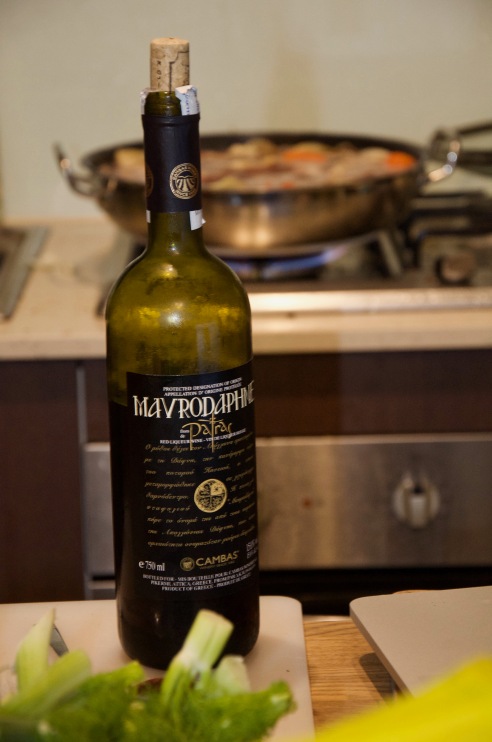 One spring late in Against the Day, Auberon Halfcourt and Umeki Tsurigane find Yashmeen, Reef, and baby Ljubica on the Greek island of Corfu. They dine “in a taverna down by the harbour in Garitsa.” Page 975:

They sat at a long table and ate tsingarelli and polenta and yaprakia and a chicken stoufado with fennel and quince and pancetta in it that Nikos the owner and cook said was an ancient Venetian recipe from back in the centuries when the island had belonged to Venice, and Reef snuck his baby daughter tiny sips of Mavrodaphne, which did not put her to sleep but made her quite rowdy as a matter of fact, pulling the tail of Hrisoula, the ordinarily imperturbable taverna cat, until she actually meowed in protest.

That food all sounded too beautiful for me to leave on the page. Happily, Google dropped what appears to be the exact recipe Pynchon refers to right into my digital lap. A “stoufado” seems to be Pynchon’s spelling of “stifado,” a Greek stew. On page 136 of Aglaia Kremezi’s The Foods of the Greek Islands: Cooking and Culture at the Crossroads of the Mediterranean there lies a chicken and fennel stew with quince and pancetta. Kremezi even provides that backstory that Pynchon has Nikos pass on:

From what I’ve been able to gather, the Ninetta Laskari book referred to is a history written in the local Corfu dialect called Corfu: a Glance through Time. Barring the not totally far fetched possibility that Pynchon reads Corfiot, I must conclude that the above Kremezi cookbook is Pynchon’s source here! (Feel free to lift that when you get onto An Against the Day Companion, Stephen Weisenburger.) You can see how he was unable to resist a story like this one, especially in Against the Day—East and West layered throughout history into a hearty family meal. 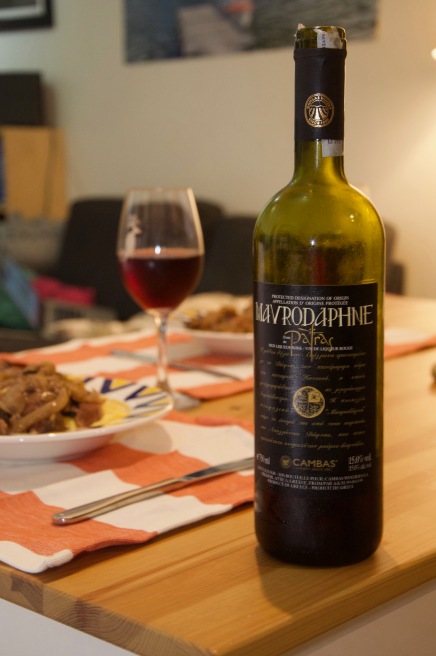 So anyway, equipped with a recipe straight out of Against the Day, I’ve ventured beyond the liquor cabinet and into Tom Pynchon’s Kitchen. The venture has been rewarding. This was some mighty delicious Greek grandmother Sunday lunch goodness. It was chicken, fennel, quince, and pancetta stewed for ~1.5 hours in a mixture of sweet Mavrodaphe wine and whatever dryer red was sitting on my counter, and was the yummiest thing I’ve made in ages. I highly recommend hitting up the google book above for the recipe–especially if you have any of this Mavrodaphne easily accessible. I didn’t manage to recreate all the side dishes that Reef et al enjoy (couldn’t even figure out what “tsingarelli” was), but I did follow Nikos in serving it with polenta.

Half the bottle of Mavrodaphne went into the food, and I can’t say I’ve mourned the loss. It did wonderful work in the stew, but it’s not the greatest drinking. It smells very fortified and not very welcoming, although it’s only 15%. The taste is sweet and round and quite like a Marsala cooking wine. It’s drinkable, but not exactly thrilling. It may have made baby Ljubica rowdy with all that sugar, but I’m more likely to be put into a happy well-fed sleep.