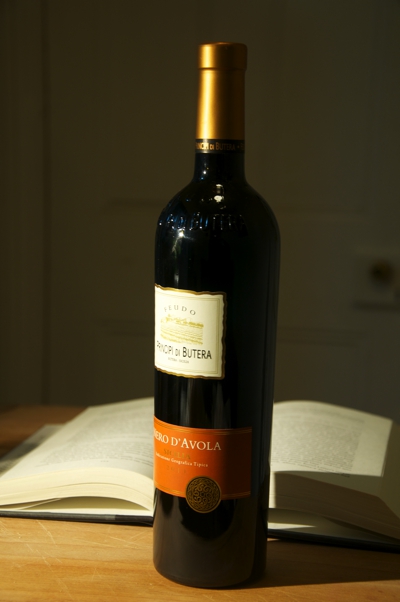 Early in Bleeding Edge, Maxine pays a visit to the VC (which I’m assuming is venture capitalist) who’d supported hwgaahwgh.com (which address now conveniently directs one to the book’s wiki). The VC is Rockwell “Rocky” Slagiatt, who’s dropped his surname’s terminal vowel in order “to sound more anglo,” despite then “becoming disingenuously ethnic again” in Maxine’s presence. Slagiatt takes Maxine to Enrico’s Italian Kitchen, which she recalls “getting rave reviews in Zagat.” (Enrico’s unfortunately doesn’t seem to be a real place. Brings up a grand total of two Google results, both for the BE wiki. But I’m about as distant as can be from NYC anyway, so what’s it matter.) After some faux-Sopranos banter between Slagiatt and the waiter, they order:

Maxine ends up having the homemade strozzapreti with chicken livers, and Rocky goes for the ossu buco. “Hey, what kinda wine?”

“How about a ’71 Tiganello?—but then again with all the wiseguy dialogue, maybe just, uh, li’l Nero d’Avola? small glass?”

“Readin my mind.” Not exactly doing a double take at the pricey supertuscan, but a certain gleam has entered his eye, which is what she may have been looking to provoke. And why would that be, again? 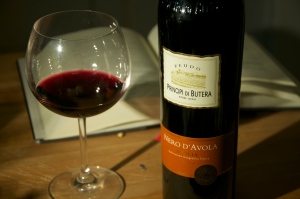 Stozzapreti with chicken livers? Someone can start an every-meal-in-Pynchon blog. Not too bad being stuck with the drinks though–even if (like Rocky) I haven’t shelled out for the ’71 Tiganello, this Nero d’Avola is nice stuff. The bottle I have (from Feudo Principi di Butera) here claims on its reverse to be “a supreme expression of the indigenous Sicilian grape variety par excellence.” The winemaker’s website says they wrote the book on Nero d’Avola. Guess I’ve got no way to confirm or deny these assertions, but I can say I like the stuff. Maxine does too, even if her lunch investigation doesn’t go so well:

She can hear from inside her purse the as-yet-undeposited check laughing at her, as if she had been the butt of a great practical joke.

The Nero d’Avola on the other hand is not bad at all.

Mine is big, rich, and tanniney. Dry, but with an interesting tannin sweetness. A bit spicy, maybe some cherries. Not one to guzzle, but very drinkable. It’s making me wish I were sitting in an Italian place with a plate of livers to go with it. Or maybe not livers. Maybe I’ll take the ossu buco.