I’ve recently embarked with the Chums of Chance aboard the good ship Inconvenience—and man, (isn’t this supposed to be some kinda kid’s book?) the air in here sure is alcoholic. My Against the Day list is already 50 drinks long, and I’m not even halfway through. Gravity’s Rainbow only has 45 or 46 all up. And now that’s as smooth a segue as you’re getting into this drink, hailing not from Against the Day but from Gravity’s Rainbow. The drink’s smoother than my segue. It’s as much an American classic as the book is. The old fashioned.

I’ve not witnessed any Pynchon character actually drinking an old fashioned. Slothrop just eats the cherry from one. Or I presume he ate one at some point, given this catalogue from page 63:

Upstairs in the men’s room at the Roseland Ballroom he swoons kneeling over a toilet bowl, vomiting beer, hamburgers, homefries, chef’s salad with French dressing, half a bottle of Moxie, after-dinner mints, a Clark bar, a pound of salted peanuts, and the cherry from some Radcliffe girl’s old-fashioned.

Slothrop’s mouth harp then heads down the toilet too, and he’s of course obliged to follow right on in down after everything (see: Canadian Ale).

The fact that that Radcliffe girl had a cherry in her old fashioned is actually pretty interesting, mixologically speaking. That’s because the old fashioned has gone through a few very distinct phases in its evolution. It began as arguably the first cocktail, described in 1806 as composed of “spirits, bitters, water, and sugar.” By 1860, the drink was referred to as an old fashioned, and usually made with rye whiskey or bourbon. But after Prohibition, people seemed to have forgotten what a good thing they’d had, and the old fashioned mutated into a sweet abomination full of muddled fruit. That’s when the cherry appears, and that’s likely the sort of old fashioned Slothrop’s Radcliffe girl drinks. (Slate has a great 1936 letter to the New York Times from an old timer complaining about the new old fashioned.) The old-fashioned old fashioned without all the frivolity didn’t really make a big come back until the classic cocktail revival of the early aughts.

guess if I were going to be really faithful to the drink as it appears in GR, I’d mix myself up the fruity version with a cherry. But I’m a big fan of this drink, and I just can’t bring myself to do that to it. Instead, I’m following the sage advice of Old Fashioned 101 and doing it right. I used:

In that order, no ice. And can I say right now I’ve never mixed myself a better drink. I love these old manly cocktails, but I imagined it’d take bartender skills more serious than mine to make a decent one. But no, the thing was beautiful. It’s all I can do to keep from making it a nightly habit.

Okay and we’re not done yet: 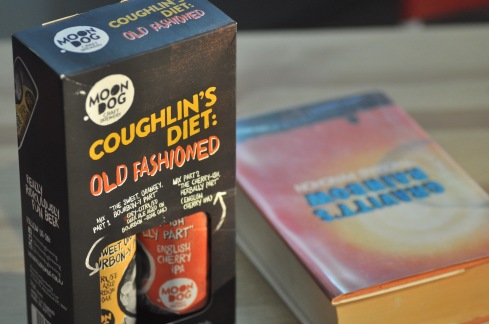 If there’s one field of alcoholism in which Pynchon tends to let me down, it’s good weird beer. Not that there’s nothing at all, but the books are just all set pre- our current glorious era of interesting beer. Very happily though, my favourite brewery, Moon Dog, just made an old fashioned in beer form. Even better: it’s two beers you mix together. One provides the “sweet, orangey, bourbon-y part” (a dark ale with a bit of citrus zest and orange bitters, aged on bourbon soaked oak staves) and the other the “cherry-ish herbally part” (an English IPA brewed with cherries). 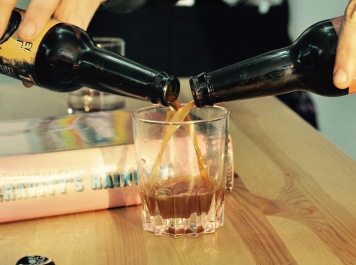 It was good. Uncannily like an old fashioned–especially just in the dark ale half for me. SO bourbon-y, with a great citrus-y bitterness. The cherry IPA pulled it a little far towards the fruity style old fashioned, though I guess that was maybe the idea. It was undeniably, as Moon Dog’s motto runs, “Really ridiculously fun beer.” Both beers on their own were excellent too. And hey look, I did kinda sorta get around to having Slothrop’s girl’s cherry (IPA) version! 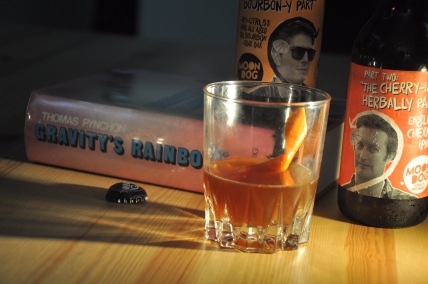