Against The Day, Wine

“It’s like licking a bloody piece of slate tile” quoth my father post-quaff of this Mâconnais. He seemed to intend this as a compliment.

The Mâconnais is a Southern chunk of the Burgundy wine region, known for producing value-for-money Chardonnay. This bottle (Louis Latour Les Deux Moulins Saint-Véran) did indeed seem reasonably cheap for fancy-sounding Burgundy under a a classy-looking label. Whether it constituted value or not I am ill-equipped to judge.The shop claimed it was “rich and powerful” with “toasty brioche aromas,” as if it were some kind of boulangerie magnate / French mafia boss. I remarked at first that it was one of the blandest wines I’d ever tasted. But I remain something of a philistine regarding  white wine—it may have been just too subtle and elegant for me.

In Against the Day, Yashmeen’s posse of Lorelei, Noellyn, and Faun draw a bottle of Mâconnais while convincing her to dump Cyprian. Page 494:

“But he makes me laugh.”

“Yes they are good for that,” conceded serious Noellyn, “though one does hear, more often than one would care to, this ‘he makes me laugh’ defense. There being laughter, this is, and laughter.”

“And if laughing’s what you fancy…” Lorelei held out one of the bottles of Mâconnais they had brought.

I personally didn’t find anything very humorous about the Mâconnais. It struck me instead as rather serious. But Yashmeen is a woman of unusual tastes I suppose. And perhaps I just didn’t get through enough bottles for the funny side to reveal itself. 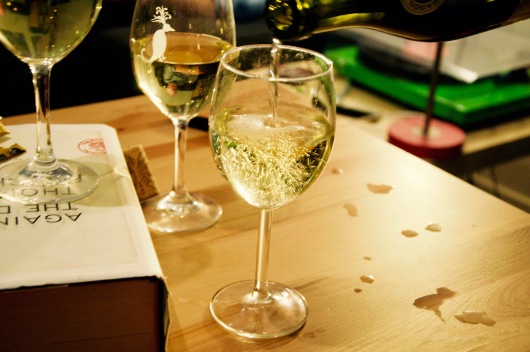 One response to “Mâconnais”