Just post-Slothrop’s troubling moment with the really-too-young Bianca (discussed with great thoughtfulness and insight on the latest Pynchon in Public podcast), our dubious hero finds himself weaving through “newly-risen roisterers” below decks on the Anubis. Page 480:

There is hardly a thing now in Slothrop’s head but getting to Bianca. At the end of the passageway, across a score of empty faces, he spots Stefania in white cardigan and slacks, beckoning. It takes him five minutes to thread his way to her, by which time he’s picked up a brandy Alexander, a party hat, a sign taped to his back urging whoever reads it, in Low Pomeranian, to kick Slothrop, lipstick smudges in three shades of magenta, and a black Italian maduro someone has thoughtfully already lit.

“You may look like the soul of conviviality,” Stefania greets him, “but it doesn’t fool me. Under that cheerful mask is the face of a Jonah.”

Now as we know, this boat is well-stocked with connoisseurs of a good time. Slothrop’s doing well to reach ‘soul of conviviality’ levels among such practiced company. He does have a whole happy rollicking package going on though, and that brandy Alexander is definitely contributing. 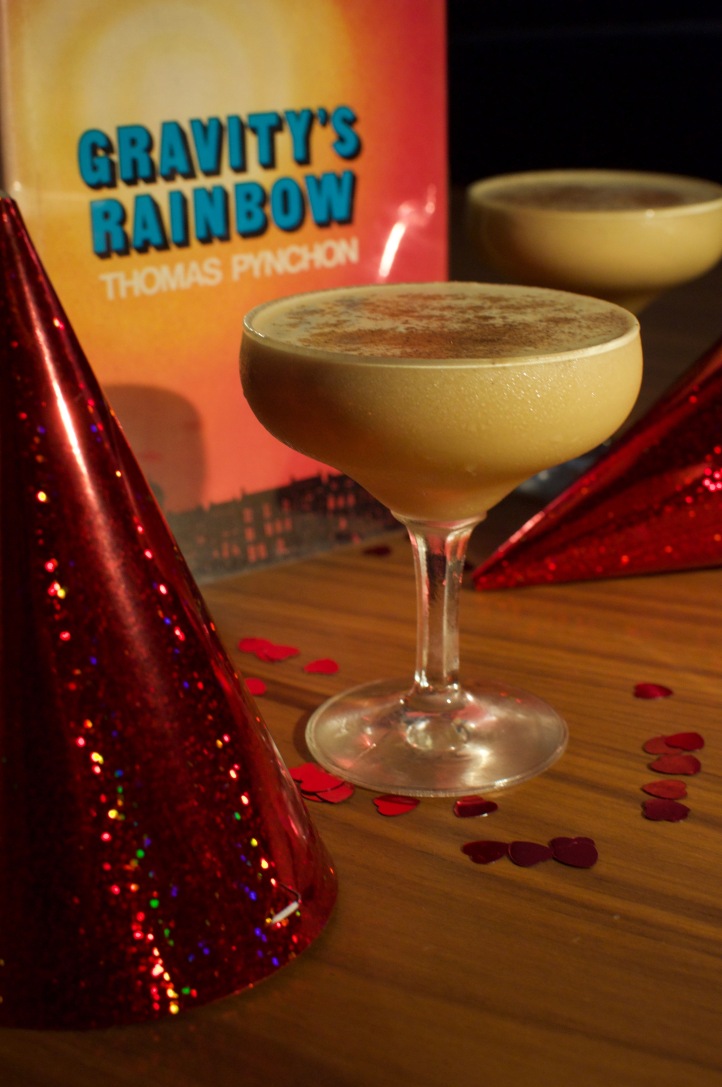 This brandy Alexander in front of me is also contributing to its fair share of conviviality. Damn these things are delicious. Velvety soft and sweet, with just enough depth to keep me coming back for more.

Mine’s based on this, with:

shaken with ice and topped with a generous helping of grated nutmeg.

Somehow I’ve been listening to a Feist song called brandy Alexander for years without every actually drinking one. I now see the error of my ways. Pynchon’s narrator makes no mention of Slothrop actually drinking his brandy Alexander either. This may account for Slothrop’s drinking anything but this at any point from here on in the book. Because if he’d actually tried it, I wager he’d be hooked. It’s a pillowy indulgence that begs to be repeated. I mean, I’m tempted to shut down this whole ‘every drink in every Pynchon book’ business and just go for ‘a brandy Alexander for every page in Pynchon.’

On the other hand, Feist does point out that the brandy Alexander “always gets [one] into trouble,” and maybe Slothrop’s really got enough of a knack for that already.