It’s time for that old favourite game again: drinking things Guardian commenters say you shouldn’t. Last time it was vodka with milk, vegetable soup, and watermelon juice. Today it’s the Soju Wallbanger, about which one “sprockethawk” holds some strong opinions:

I am sorry to report that my evening has thus far involved no solar sparkle sauce; nor do I see any in my future. In that respect the Soju Wallbanger has been a great disappointment.

I can’t say I have much idea what old mate sprockethawk is talking about at all. The Soju Wallbanger isn’t terrible, but it isn’t great either, and I can’t imagine wanting enough to wind up banging any walls. It’s a soju version of the more typical Harvey Wallbanger, which uses vodka. Here’s what’s in mine, based on The Spruce‘s recipe for the original:

It’s a vanilla-ey twist on a screwdriver. The vanilla really could be more subtle; it’s almost a bit sickly. Drunk Pynchonette remarked that it tastes like a creamsicle. On the other hand, I seem to have devoured the second half of mine more or less without noticing I was drinking, so I guess one quickly adapts to the sweetness. 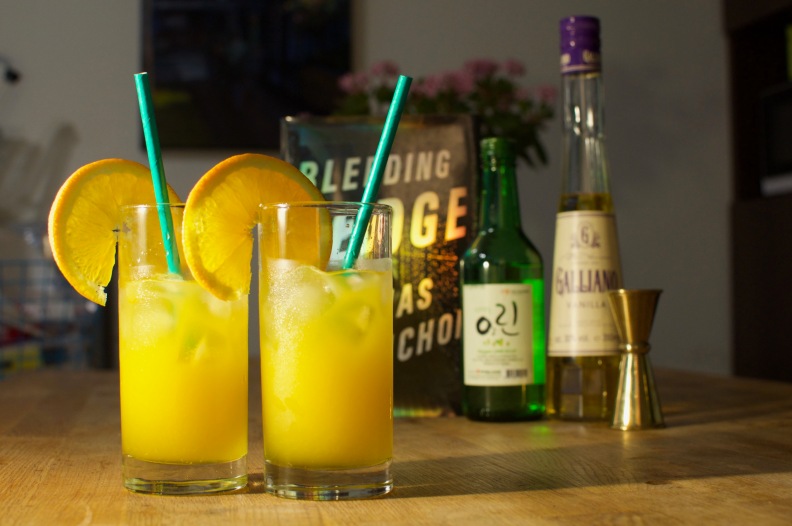 In Bleeding Edge, the Soju Wallbangers appear in a Korean karaoke club where Maxine is on a sort-of date with Rocky Slagiatt, along with his “tone-deaf associate” Spud Loiterman and some other hangers-on. Maxine’s been in the bathroom, congratulating a fellow karaoker on her neo-Country take on an off-Broadway number. Page 154:

They emerge from the ladies’ to find the company grown noticeably rowdier, Soju Wallbangers in glasses and pitchers everywhere, Koreans horizontal on couches or, when vertical, singing with their ankles crossed, teenage obsessives with laptops playing Darkeden over in the corner, Cohiba smoke hanging in strata, waitresses laughing louder and cutting more slack for borderline lechery …

The more of this stuff I drink, the more I am coming around to the view that it could get dangerous. It does have that mindless nightclub smasher quality about it. Certainly were I required to perform karaoke I might find myself reaching for a second pitcher. Perhaps sprockethawk was onto something after all.

MAYBE that snazzy iridescent cover on Bleeding Edge is intended to evoke that solar sparkle sauce?

I will report back should I wake up tomorrow covered in any.